Gold's yearly returns compared with other major US and UK investments

ANNUAL PERFORMANCE of the major asset classes has varied widely over the past 50 years.

But how widely? And how do the annual returns from gold – the best performing investment of the 21st century so far for UK investors, and the best behind only commercial real estate investment trusts in the US – stand in comparison with stocks and shares, bonds, property and cash?

Here, BullionVault's research team have gathered and published the annual investing returns data for the major US and UK asset classes since 1972, the year after the Gold Standard was finally abandoned and the world's currencies began to float freely of each other.

Consumer-price inflation in the United States edged up that year to 3.4% before leaping 1973 and 1974 on the first Middle Eastern oil crisis and on its way to peaking at almost 15% in 1980. Overnight interest rates would then touch 22% as Paul Volcker took over at the Federal Reserve with a mandate to squash the 1970s' runaway cost of living.

The Fed's record-high interest rates first led to a global economic slump, but they laid the ground for a "long boom" in growth, as well as in bond and equity returns, as inflation retreated and interest rates then fell back during the 1980s and '90s.

Two stockmarket crashes, a property and banking slump and then a global pandemic followed after the year 2000. During this period, as our Annual Asset Performance data show, the investment return from gold has come in the top 1 or 2 position eight times for US investors, second only to Commercial Real Estate (10 times) and beating the 21st Century showing so far for non-US equities (7 times).

US investors meanwhile saw 2 remarkable years ahead of the Covid pandemic, with the 2018 returns to cash in the bank (as tracked by the annual average yield on 3-month T-bills) beating inflation for the first time since 2008 as a record-long unbroken bull run in US equities ended. Then 2019 saw shares, bonds, real estate and commodities all rise in price and all beat US inflation, as did cash in the bank. 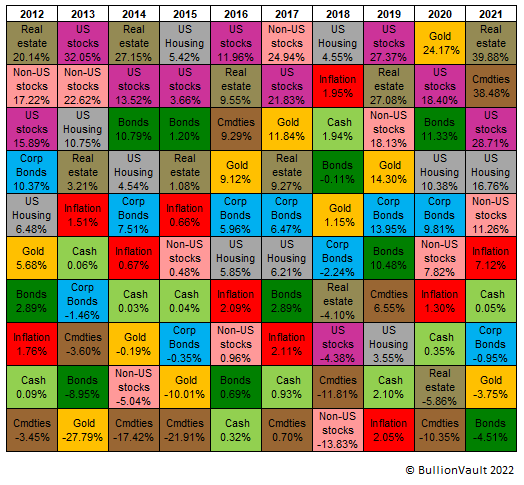 For UK investors (viewed on a more limited range of assets due to poorer availability of consistent data), gold has topped the table 7 times since 2000 and beaten total returns from the FTSE All Share index 12 times.

Gold's annual performance in 2013 sank to the bottom of the table, delivering its heaviest loss to UK investment portfolios in our 50-year series. It then recovered sharply amid the political shocks of 2016 (first the UK's Brexit referendum and then the election of Donald Trump to the White House), stalling in 2017 but topping the table as shares fell in 2018, showing double-digit gains in the last year of the 2010s and then topping BullionVault's UK annual asset performance table again amid the Covid Crisis of 2020.

Note also that, contrary to common thinking, gold doesn't always beat inflation in the cost of living year-to-year. Indeed, priced in British Pounds it lagged the UK's RPI index 24 times between 1972 and 2021. 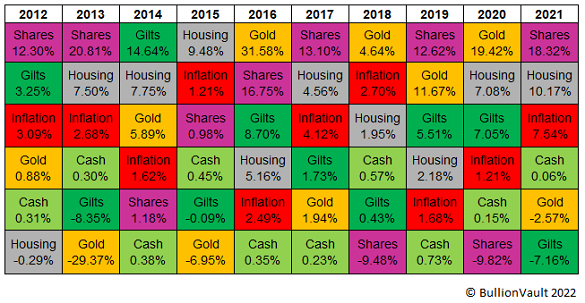 Volatility in gold's annual returns outstrips other assets, as the notes to BullionVault's performance tables show. But the lessons from 2008 and 2020 remain plain.

Diversification counts, and gold really has acted as portfolio insurance when investors needed it most. Making an allocation to bullion should be a prime consideration when you look for help to offset the equity, interest-rate and real-estate risk of a broader, well-balanced investment portfolio.

All data are total returns, before costs or taxation (unless specified).

Please note: These tables are published to inform your thinking, not lead it. All information and analysis must be verified elsewhere should you choose to act.

US Dollar asset-class performance, annual returns for 50 years since 1972: Key

Please Note: This analysis is published to inform your thinking, not lead it. Previous price trends are no guarantee of future performance. Before investing in any asset, you should seek financial advice if unsure about its suitability to your personal circumstances.

Try out buying and selling with a free sample.

In your choice of vault through the live order board.

Please select an option below and 'Save' your preferences.

You have not been active for some time.

For your security you will be logged out in   minutes unless you take action.